Support vector machine deals in finding a hyperplane, which is an N-dimensional space(N-number features) that specifies the data point.

Support vector machines help in protein classification, image processing and segregation, and text categorization. It is the most standardized one, and it is already used for giving medical adherence to the heart patient and helping millions of patients to cure. It is the best learning model for the regression, detection of outlines.

It is the only algorithm, inspired by animal brains. It actually receives a signal from one layer and sends it to another, and analyzes itself by the situation, what to perform.

It reflects the behaviour of the human brain and tries to solve the problem and common issues, by programming with the computer.  It is divided into CNN (convolutional neural network) and RNN(Recurrent neural network).

Imaging is the most important process in healthcare, it can help us in predicting the diseases before the symptoms arise.  Also, there are many processes such as colonoscopy, mammograms etc. in this whole CNN signifies its crucial role and RNN signifies its pattern recognition in medical data analysis.

Logistic regression is used to predict the scenario of healthcare, it helps in assisting the discrete values (usually from 0 to 1) from a set of different variables. It helps in calculating the profitability of an event by measuring to a logit function, it is called logit regression.

There are various types of methods that can be used to eliminate some features from it. Such as:

KNN algorithms have the specialty that they can apply to both types of regression problems, in the medical field it is said that it stores all the available information from the database and simplifies the new cases by taking votes of several cases.

In a simple way, if we look at though it’s like, that you are given a task to gather the information of an individual, then you must start with his family and friends.

There are some points that you should keep in mind before planning for KNN:

Each tree is planted and grown in some specific ways as follows:

Analysis and study of several algorithms are needed for better understanding.

Every sector in this world deals with data and information. So being a specialist it is necessary to judge the raw data and its uses so that it will benefit all the sectors like corporates, hospitals, government offices.

The process like factor analysis, decision tree, missing value ratio and decision analysis all these methods can help you find relevant information.

These gradient boosting algorithms deal with larger data sets to make decisions with more accuracy. It collects all the from various sources and is able to make the crisp decision it assembles the predictive power and makes the decision.

Currently, Kaggle, crowd analytix etc. are used as the best competitors, these are the most achievable and highly used algorithms today, but to be precise in your task you can use it with R codes, Pythons to have accuracy in your outcome.

Possibilities in the near future:

The possible outcome is that in the near future, experts will make some new distinct models with newly featured algorithms, where the future seems to be full of artificial intelligence (in nearly 2040). You can approach the studies in these fields if you are serious about machine learning, AI learning.

After discussing all these, I am sure you will have some ideas for the future and some techniques to build a career in. Well, innovations are done in the field of medical science too rapidly. Another tip for beginners, if you could think of just once, then every small thing can not be done without the help of technology and in the healthcare sector after the pandemic, the top healthcare mobile app development companies; growing at a faster pace. 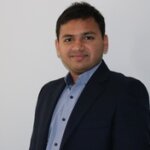 Parth Patel Author
Parth Patel is a serial entrepreneur and CEO of SyS Creations – a leading mobile app development and IT consulting firm. Operating the IT Infrastructure of Healthcare SMEs and startups keeps him on his toes and his passion for helping others keeps him motivated.