In the reign of app development, there is an age-old battle going on between native and hybrid technology, particularly Flutter vs. React Native. Seldom do developers become indecisive while choosing the apt technology. Because a technology decides the prospects of an app in terms of scalability, features, dwell time, and support. A developer needs to consider all the aspects before concluding.

In this article, we present a comparison between React Native vs Flutter, helping you make an informed decision.

React Native is a JavaScript-based open-source framework for building mobile apps using JavaScript. It is a mobile development platform that helps developers build native apps for iOS and Android.

React Native has become one of the most popular frameworks used in the industry due to its simplicity and flexibility. It is now used by companies like Facebook, Instagram, Airbnb, Netflix, Twitter, Uber, etc.

React Native has been praised for its ability to be easily learned and for its speed when compared to other cross-platform development. Following are the advantages of React Native technology:

React Native provides a way for developers to build cross-platform applications on both mobile devices and the web using JavaScript with React’s declarative components as well as its virtual DOM diffing algorithm, which makes it possible for applications to be fast and fluid while being efficient with memory usage.

React Native has become the vogue choice among developers, with its basic framework, easy integration into apps, and a large community of enthusiastic programmers. The faster development process and better user experience lead to more innovation from the community.

Though React native has been widely adopted by companies, there are also a few disadvantages of using it, which are as follows:

React Native has been criticised for its large size and slow performance in comparison to native apps. It is one of the reasons why it is not an ideal choice for developers.

On the internet, you will find several React Native libraries. Unfortunately, most of them are either abandoned or not getting updated regularly. This is a major turn down for app developers from using this technology.

Flutter is a new cross-platform, cross-device mobile development framework that allows you to build beautiful native interfaces for Android and iOS devices without needing a third-party SDK.

Google developed Flutter, and it is open source. It is also the only mobile app SDK available on both Android and iOS. Flutter developers have many options when it comes to developing for the platform. They can develop for Android or iOS using their preferred language, use Dart or Kotlin as their programming language, use Flutter’s widget toolkit, or develop using Flutter’s highly customizable widgets.

The main focus of Flutter is speed, which makes it an ideal platform for building mobile apps. In addition to being fast, Flutter also offers high-performance graphics rendering and animation.

Flutter is a cross-platform app development framework for building high-performance solutions. Following are the Advantages of Flutter:

The quality documentation helps developers understand the framework better and allows them to get started with their projects quickly.

It allows developers to solve complex problems in a fraction of the time. Flutter also provides developers with access to a wide range of tools and libraries, making it easier for them to build their apps without worrying about how they will integrate into their projects. As a result, time-to-market reduces.

Flutter enables developers to write code once and deploy it across multiple devices without the need to recompile or redeploy their app. This also means that you can share UI elements across your apps without making changes in the codebase.

Flutter is a mobile app development technology that allows developers to create cross-platform apps. However, Flutter has some disadvantages, which are as follows:

The Flutter community is small compared to other frameworks, so it doesn’t have as many resources and support. This can lead to lack of tutorials and even lack of help. However, this is not a significant disadvantage as far as we can understand.

#2 Not as rich as React Native library

Though Google backs Flutter, the library is not as rich as it should be. Since the technology is newer, you can’t always find the functionality you need in libraries.

Flutter and React Native are both cross-platform mobile app development frameworks that still have a lot of their own differences. Following is the detailed performance difference between React Native and Flutter:

Both frameworks are relatively new and have their own strengths and weaknesses. Flutter has a very minimal learning curve, which makes it easier to start with. React Native,as opposed, has a longer learning curve but provides more flexibility in terms of developing apps for multiple platforms at once.

Application size plays a vital role in choosing the frontend framework. Here, less size is always better. The size of the Hello world app in Flutter and React Native is 7.5 MB and 13.4 MB, respectively.

User experience is the heart of an app. It defines how a user will interact with your app. Smoother, simple, and intuitive UI/UX should be the goal of a developer. Flutter offers a rich UI/UX and can be built-in easily. Thanks to the generational garbage collection feature. On the other hand, with constantly evolving Android’s Material Design and Style Design in iOS, it is difficult to satisfy the requirements of native platforms.

So, now the comparison between React Native Vs Flutter would be crystal clear in your mind. The next step is to assess the requirements taking account of all future scope of your project, and find where it falls.

If you want guidance, feel free to contact EnProwess – the best mobile development company. We are a team of mobile app developers who are ready to solve your concerns pertaining to app development and software development.

We are equipped with the latest tools and technology which helps us to deliver top-notch solutions for all your mobile app development requirements. For more information, visit our website. 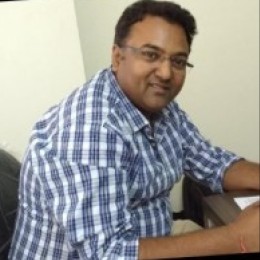 Chirayu Joshi Author
Chirayu Joshi is the CEO of EnProwess - an emerging custom software development company that offers mobile development, web app development, dedicated developers, and software testing service at a competitive price. His bold leadership and foresight have taken the company to great heights. He loves to read and share his insights on the tech industry.