A Blockchain refers to a timestamped series of immutable data records that are managed by a cluster of computers that are not owned by any single entity. Each of the blocks of data is secured and are bound to each other by the use of cryptographic principles, known as chains.

The Blockchain network holds a no-central authority. It is shared, and an immutable ledger and the information being stored is open for everyone to see. Any data built on the Blockchain is very transparent, and hence, everyone is accountable for their course of action.

A blockchain has no transaction costs involved. There is an infrastructure cost, but no transaction costs exist. It is a simple and ingenious method of passing on information from a source to a destination in a fully automated and safer way. One of the parties involved needs to initiate the transaction by creating blocks. The designed block is verified by a vast number of computers present around the net. The verified block is then added to a chain and stored across the net by creating not only a unique record but also a unique record that has a unique history. When a single record is falsified, the entire chain having millions of instances is even falsified, and it becomes virtually impossible. Bitcoin has now and then using this model for carrying out the monetary transactions, and it can be deployed in various other ways as well.

The Blockchain can not only transfer and store money, but it can also replace the processes and business models that are dependent on a small fee for carrying out transactions or any other type of transaction between both parties. 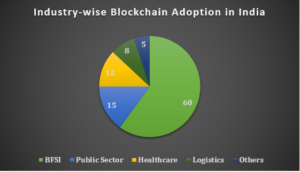 Industry Adoption of Blockchain in India (for 2019)

The information that is held on a blockchain exists as a shared and a continuous-reconciled database. This method of using the network which holds several apparent benefits. The database of the Blockchain isn’t located or stored in a single location, i.e. the records are kept public and easily verifiable. There is no centralized version of this information that exists for any hacker to corrupt. The information is hosted by millions of computers present in the network, and the data is accessible to anyone present on the Internet.

Reasons for Blockchain Being Successful

Following are some of the reasons why blockchain has become successful- 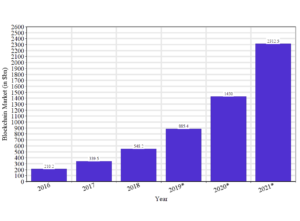 How Blockchain Benefits the Healthcare Industry

The exchange of health data is one of the essential features of Blockchain in the healthcare industry. The healthcare startups can use the blockchain-enabled IT systems for delivering technological solutions for many challenges, which include health data security and interoperability.

The blockchain technology makes it possible to develop smart contracts. The smart contracts allow the doctors to carry out the information exchange with more flexibility and freedom, inline with the health-related decisions which are made, be it a patient willing to choose to disclose his health records or even a doctor sharing information with his fellow doctors

The healthcare industry is known for its strict policies and regulations, ensuring the security and privacy of the data.  With the increase in the number of cybersecurity threats, new problems are created for emerging digital workflows.

As it is not possible to hack or modify the data saved on the Blockchain, this technology can help in resolving the cybersecurity challenges faced in the industry

The healthcare-related organizations and firms can use the Blockchain for record management as well as bridging the traditional data silos, thereby increasing the efficiency and keeping the medical data safe. This technology would also streamline the entire process for patients to access their medical records and securely share data. By using the blockchain technology, the transfer of medical records between two institutions is likely to decrease, thereby making the process of auditing much more manageable. 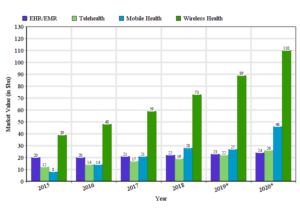 SWOT Analysis of Blockchain in Healthcare

Blockchain along with other technology drivers such as IoT and machine learning has become a key driver for triggering new digital processes. It has already begun to revolutionize healthcare and in the coming time. With the rapid development of blockchain as a technology, the healthcare industry is also adopting it by having many companies in the arena which are looking to implement it for their business. This includes the pharmaceutical companies along with hospitals and healthcare institutions where the usage of blockchain would lead to a faster and efficient problem-solving. The blockchain will make it easier to deploy the technologies for smart storage of data, different transactions as well as patient care and research. 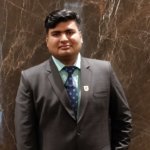