A system image backup is a compressed file that contains an operating system, boot sectors, custom settings and all programs installed & files saved on those partitions. You can restore the computer from a system image backup if Windows failed to boot or hard drive died. AOMEI Backupper is a best free backup software that can help you create a system image easily! AOMEI Backupper is also a comprehensive backup and restore application and works by making a full disk image of the hard drive so that it can easily be restored in case of a disaster. AOMEI Backupper supports all Windows versions including Windows 7/8/10/8.1/XP/Vista.

How to create the system image to USB with AOMEI Backupper? 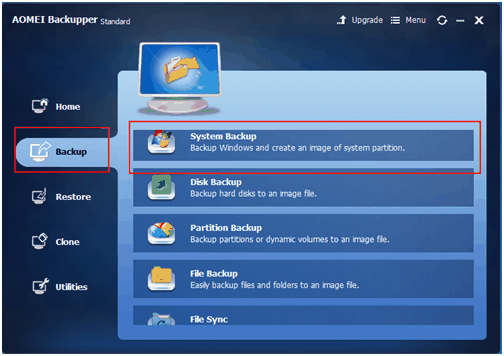 Step 2: You need to name the backup task, the system file will be chosen by default at “Step 1”, and you should select your USB as the destination path at “Step2”. 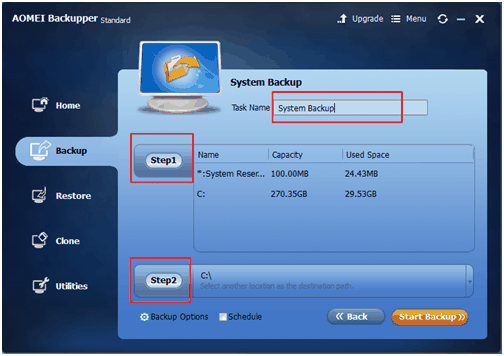 Step 3: Finally, click “Finish” when the process is done. 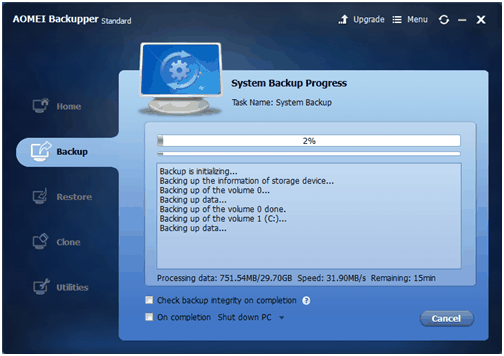 Different system image programs use different types of system images. For maximum compatibility, you should use the same tool you used to create the system image to restore it.

In the home page, you can backup files, folders, system, partition and disk, but you can only create disk clone and partition clone, create schedule backup, full backup, incremental or differential backup. In addition, you can also increase comment to backup, split, compress and encrypt the backup. You can use the software to upgrade disk. Disk backup is to backup hard disk drives to an image file; Partition Backup is to backup partitions or dynamic volumes; System Backup, on the other hand, is to the one-click backup system drive.

When you open the restore window,  you may choose the source backup and hit the target path in the first place. And “Restore” provides many functions like System Restore, Disk Restore, Partition or Volume Restore, Sector by Sector Restore and Edit Partitions. The first three functions are corresponding to the Backup options.

In the Restore Window, first, you may choose the source backup and hit the target path. Meanwhile, “Restore” provides many functions like System Restore, Disk Restore, Partition or Volume Restore, Sector by Sector Restore and Edit Partitions. The first three functions are corresponding to the Backup options.

Two options list in this Window: Disk Clone and Partition or System Clone. Disk clone is also called disk copy. It refers to the process of copying the complete content of a hard drive to another hard disk by computer software or hardware for the next recovery. Partition clone is a part of the disk,  it includes many partitions, such as C:, D:, E:, F: etc.

AOMEI Backupper is available in standard, professional, Server, Technician and Technician plus editions. It supports system backup, partition backup, disk backup and file backup.etc. AOMEI Backupper is also a backup and restore software specially designed to protect the system & files against ransomware like WannaCry, Wanna Decryptor, Cryptolocker, etc. If you feel like your computer without the risk of infection, you can use AOMEI Backupper Standard to do a full backup now!

AOMEI Backupper is a free and professional backup utility which that supports system backup, partition backup, disk backup and file backup for users. AOMEI Backupper can be installed on 32-bit and 64-bit versions of Windows 10, Windows 8, Windows 7, Windows Vista, and Windows XP. It is simple to use this software. Even the partition that Windows is installed, you still can back up with AOMEI Backupper. Try it today!

AOMEI Backupper allows backing up individual files, folders, disks, partitions or dynamic volumes in a few clicks. It can also back up the entire operating system by leveraging the Volume Shadow Copy Service (VSS) so that you needn’t even shut down the machine or interrupt your work with files. AOMEI Backupper makes it easy to encrypt backups, sync files, create bootable rescue media, and clone a disk, partition or create a system image. We have scrutinized the usability and efficiency of AOMEI Backupper from different angles for you to get the big picture. 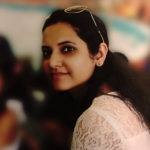 Lorina Author
I am Lorina, I enjoy helping people find solutions to their problems about backup & restore, hard disk & partitions management and cloud files transfer and so on.