There is a lot of AI and IoT stuffs today in the technical industry. Huge companies have been carrying their work in traditional high-level languages, whereas startups are turning their hope from traditionally acknowledged languages to the comparative new entrants with a lot of direct shortcuts for contemporary sophisticated software operations.

Among those popular phantoms of the IT industry, Python development services are making the most haul. Python programming language is widely popular and is the first go-to-choice for small and mid-level applications. Give hawk eye to enterprise software development, Python is everywhere. Some folks may go against the capabilities over standard software development languages, but overall, python is the first love of startups. What does a startup need from the programming language? Confused? Let us tell you:

The needs of startups and any business may vary, but the core needs of any business stay the same. Specific visions and interpreted goals are always dependent on the expansion and age of the business. Python checks almost every point in the above figure. This is the reason why Python is slithering towards the top at every index, we look at.

Let’s take a look at the Tiobe index for top programming languages of September 2021:

A quick survey from the potential companies gives an idea of expectations from the programming languages. Here, we can discuss a few of them:

Startups expect rapid outcomes, so are the requirements from the mobile and web development services. Python gives simplicity and smoothness for the initial product version and later scales it up. Let’s take a look at the simple syntax of Python in comparison to Java.

Startups have limited funds and restricted scope of investment. ROI is also uncertain. Amidst this hustle, Python development services ensure the reduced cost of development.

With the limited resources, startups face problems in accommodating less compatible programming tools.  Python is favorable for integrating with other tools.

WhatsApp, Facebook, or Zomato, and many more have been startups once. You never know the limits of scalability you need. Python is best with scalable apps and flawless performance.

Python development companies find python a perfect companion for a startup IT business operation. Look around you will need no answer for proving the scalability of Python apps. The world’s most popular web apps such as Google, Instagram, Netflix, Dropbox, and Spotify are built with the dynamic capabilities of Python.

Let’s make this idea more powerful to hire python developers for your upcoming projects. Experts tell Python to have the following features:

Despite, Python being an HLL (High-level programming language), Python development companies claim it to be simple and promising for rapid software development. Core principles make python capable of fast development and concurrent requirements. A few of these core principles are:

Python developers like python for its simple and easy-to-understand syntax. For amateur coders, there is an easy learning curve for Python coding. Python enables more functionality with fewer lines of code in comparison to Java or C.

Python has a large community of enthusiastic developers for getting support. For a new web development company, starting off the project is easier with large community support whenever the problem occurs in the development journey. The language is growing continuously and libraries are increasing its functionality.

Python is compatible with seamless functionality across different platforms.  For Windows, Linux, and macOS, Python is widely used in developing web frameworks, gaming software, and other app development. Recently, Python is widely popular for machine learning and data science application. For the finance industry, Python has become a great advantage, whereas the first choice for Artificial Intelligence and ML. Python is faster, allowing more code in less time which saves time and cost both.

Startups are built over some vision. Any idea can grow if the right set of tools are used to harbor it. Let’s suppose, you are a startup and approaching a Python development company for your esteemed project. Maybe your project may face challenges, or it might grow too. Therefore, scalability is always needed for business applications. Python is simple and easy to maintain, whereas the Django framework makes the task smoother with series of detachable components that can be altered, replaced, or removed as per the requirements of the project.

Python is best for releasing the first version of your product. MVP is important allows to gather the maximum information for the market response and communicate with customers with the least cost.  For startups, it is important to build an MVP for raising the fund. Python gives rapid development using rich libraries and fewer lines of code, which makes it the first choice for MVP development.

For startups, it is not possible to create a large team for developing proof of concept. Also, it is not favourable every time to hire a Python web development company. A Python developer gives more productivity than a programmer in another coding language. This helps you to keep a shorter team size with the restricted budget.

Python is useful for every level of developers. Startups need innovation and dynamic python is rich with it. Python is for everyone, be it amateur coder or senior coder. The language is commonly used in software packages in the VFX field while Python development services are largely hired for software automation. Above we have discussed all possible reasons, why Python is a final choice for startups and their unconventional idea.  Discuss your idea with an expert and collaborate with any good Python development company bringing a live version of your idea 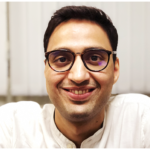 Jitu Bhaskar Author
Jitu Bhaskar is the founder of SemiDot Infotech, a website and mobile application development company that has made a global presence in a relatively short time. Jitu Loves working with Start-ups and Entrepreneurs to create a better world and has a keen interest in the Blockchain, AI, AR/VR, along with other emerging technologies.