Vue.js is a progressive framework for JavaScript, typically used to build user interfaces like applications and web interfaces. Vue has made life easier via its familiar templating syntax and use of components. Vue.js works perfectly for large-scale applications as well as for startups. It allows the user to write the JavaScript file template, HTML file and even pure JavaScript file using virtual nodes.

Few amongst the many reasons why you should choose Vue.js are listed below:

Several users aren’t yet comfortable with Vue.js and create applications using frameworks such as AngularJs. However, they later wish to make changes using the Vue.js framework. Thankfully, it is possible to do so because of the highly adaptive architecture of Vue.js. Integration of any existing application irrespective of the framework with which it was developed previously, can be done using Vue.js. This feature is possible because of the similarities which Vue.js have with AngularJs and React.

Hence, their architectures can be easily incorporated into Vue.js.

An advantage in Documentation:

One of the keenest features which attract many users towards Vue.js is it’s documentation provided. The document has every point mentioned in detail and with utmost precision. It helps new developers to learn the entire process for the framework quickly. As it results in less time consumption, he can directly focus on the application development part.

Learning functions and features don’t eat up much time, and the same can be invested in understanding the process of integrating applications with the framework. Just basic HTML and JavaScript knowledge enables the user to learn and understand the entire framework quite quickly and start developing the application process even more rapidly.

Vue.js is operated using Virtual DOM; hence, any alterations made while developing won’t be seen directly on the DOM. A replica version of the DOM is created which exists in the form of JS data structures. This enables the developers to experiment and play with their designs and models and observe the changes in the UI, with the upper hand to undo anything cost-effectively. It gives Vue.js a significant benefit over Angular war.

Many frameworks for developing dynamic UI/UX enabled designs for different applications are available; most of them are open source. This framework stands out from most of the other frameworks; the reason is stated ahead. This framework is based on JavaScript and has a simple mechanism to integrate with applications. This is the main reason for its deployment.

Hence, it is not always the case where you have to create a whole application with the help of the Vue.js framework, but we can also customize the applications that are already existing using the framework.

Vue.js doesn’t have a series of multiple processes for checking in the point of testing and debugging. Hence, it restrains the number of users from being involved in the process of testing and debugging. Therefore, we have the advantage of increased speed and performance of applications. While on the other hand, the AngularJs framework is slower than Vue.js as there are many users involved in the debugging process.

Hence, it results in more time taking the process even if only one modification in the code is done. It affects applications’ performance due to the more intake of time for a revaluation of the application. Vue.js contains a tracking system that tracks the dependencies in the components of the framework in the application. These components have synchronization with the queries performed when there is minimum change done in each level of the development process.

Several Vue.js development companies will help you develop a large scale application using their extraordinary framework. Grammarly and GitLab are some of the very famous applications we frequently use, which are made using Vue.js.

It is evident that to build large applications, all you need is a framework. Vue.js development companies’ features like the ease of documentation, simplicity of coding, and easy learning curve make Vue.js very convenient. 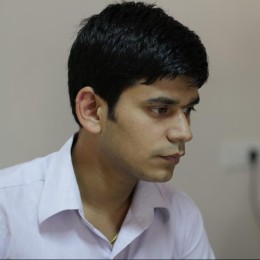 Pranab Author
Pranab Bhandari is the editor of personal finance blog "financebuzz!". Apart from managing is blog content he has contributed to many national and international publications. He has expertise in writing finance,business and markting.