“Since we can’t change reality, let us change the eyes which see reality.” – Nikos Kazantzakis

Augmented Reality, a fantasy concept from the book The Master Key by author Lyman Frank Baum has turned into reality. The “Character Marker spectacles” can be considered as the earliest imagined Google Glass. It is amazing to see that a concept imagined in 1901 has become not just a reality but a common experience 117 years later in 2018. AR technology is a perfect example of fantasy turned into reality.

Augmented Reality is a really revolutionary technology and one of the strong supports to this claim was given by Mark Zuckerberg, “We’re making a long-term bet that immersive, virtual and augmented reality will become a part of people’s daily life” but Augmented Reality is larger than what you think. There are different types of AR apps and each one is equally important and responsible for the widespread craze of AR technology.

Before learning more about different types of AR apps let’s first properly understand what AR is. Augmented Reality is defined directly; Augment means adding something to improve. So in simple terms, the process of enhancing the reality is Augmented Reality. In terms of an app a simple example would be if you look at your hand with your naked eye you won’t see anything but your hand but if you watch it through your Smartphone’s camera from an AR app then you may see a bunny (or anything that you can imagine) on your hand. This addition of the bunny on your palm is the augmentation of reality done using an AR app. The AR apps are not just limited to such child’s play but have many amazing possibilities.

Now let’s take a look at different types of AR apps that exist at present. We can classify Augmented Reality apps into 4 categories:

The next step in types of AR apps, Marker-less AR technology also called location-based AR is the advanced version derived from marker-based technology. This AR tech as the name suggests doesn’t need a visual marker or any other kind of recognition system. It is the most widely used and implemented type of Augmented Reality app. The app will scan any image or object without requiring any sort of marker for identification.

These types of AR apps scan an image of the object and looks for edges and textures to impose augmented objects on them. This becomes a harder approach for the app but AR software currently has great image processing algorithms now so this is not an issue to worry about. This technology uses various location tools and helps in recognizing location on your devices.

One of the most revolutionary concepts in AR technology is the Projection Augmented Reality. The basic approach of this type of AR apps is throwing the light onto the surface of the real world and makes it interactive by the human touch with the help of sensors. This is not the only approach; you can also use laser-plasma technology to project AR images and videos in mid-air. This would be the first step toward creating holograms.

The possibilities of this technology are endless. All the tasks you have been doing on your Smartphones will become possible without any handheld devices in near future, thanks to Projection AR technology. There have been some prototype models to this and we will see a market launch in near future.

You must have already watched a variance of this type of AR app technology in movies. Cars with a windshield that show real-time information of the objects seen ahead is one of the examples what this technology can do. In simple terms, Superimposition AR technology is when the augmented image can replace the original image, either partially or fully. The application of this technology is virtually infinite.

How to develop your own AR app?

The whole process is too technical so I would be giving a basic idea in layman’s terms. If you have any more technical doubts then you should contact a professional AR app development company to clear your doubts.

AR app building is as easy as it is tough (Paradox alert!!). The 3D model of an image, text or video is easy to make. It’s the integration of the model with the camera feed and marker tracking (for marker-based AR apps) and object tracking (for marker-less AR apps) which are the hard part. At present you can build any type of AR app for 4 main devices; Smartphones, Tablets, TVs, and Smart Glasses.

It is better to hire a very professional AR app development company to get the best results. You need to also decide what type of app are you building and what features you will be adding. This will help the developer understand which SDKs (Software Development Kit) would have to be integrated with the app. If you are thinking about making an AR game app then make sure that the SDKs are compatible with Unity engine (most advanced game engine).

SLAM (Simultaneous Localization And Mapping) is advisable for any type of AR app which needs geo-location access. Using SLAM you can track the camera feed in real time and synchronize it with the map and GPS.

Some of the most commonly used tools for AR app development are:

Industries that can benefit from building an AR app for themselves are:

Tim Cook (CEO, Apple Inc.) regards AR as a big idea similar to Smartphone. So the technology is here to stay and make its way into every possible industry with rapid speed. If you wish to build any type of AR app then getting an excellent AR app development team with specialties in AR trending technologies like 3D Modeling, 3D Rendering, Animation, SLAM Tracking, Marker-less & Marker-based Tracking etc. is very important. 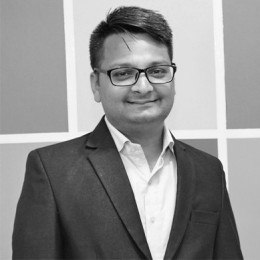 Mahil Jasani Author
Meet the COO of Excellent WebWorld and the web tech lover. Mahil has all the knowledge of Website Design and Mobile App Development. His blogs are helping lots of start-ups to understand how to improve the website performance and how to enhance the web designs.