They say every problem is an opportunity in disguise.

A mindset that projects positivity in times of adversity. Try telling that to the world’s leading social media network, which suffered its biggest ever Facebook outage in history on March 13th 2019.

It was a simple server configuration which led to the shutdown, prompting scenes of panic amongst the social media marketplace. Businesses, social media influencers and the general public joined together in venting their frustration at not being able to log into any of three social media networks with the Facebook family of apps.

As well as Facebook itself (including its ever-popular Messenger app), Instagram services were also down due to Facebook having acquired the platform in 2012. Additionally, WhatsApp, which was also purchased by Facebook in 2014, was part of the collateral damage, with its services being rendered “unavailable” during the outage. It took almost a full day for the social media juggernaut to reinstate business as usual, however many would say the damage had already been done. 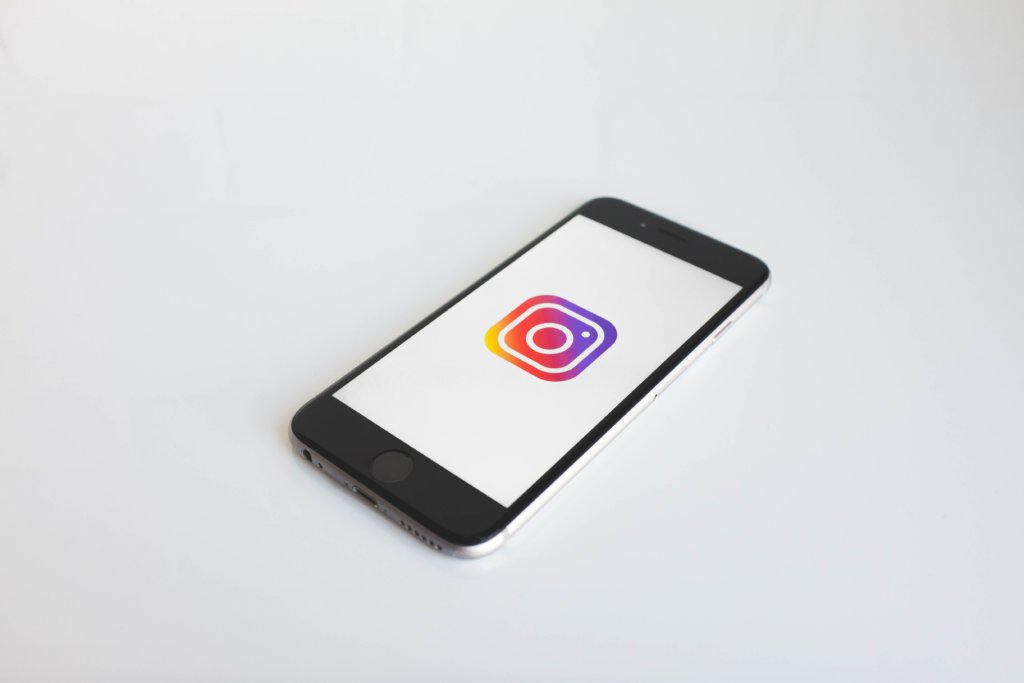 It’s Not The First Time Either

Last year in September 2018, Facebook suffered a significant hack which resulted in 50 million accounts being exposed. In a coordinated attack, the hacker (who still remains unknown) used a combination of three separate bugs to attack Facebook’s framework, resulting in a breach of personal data which made headlines for all the wrong reasons. Quick to deny a re-occurrence of this activity, Facebook were swift in posting an official company update whilst the issues were being resolved. Ironically, this statement was released on the company’s Twitter account:

After almost 24 hours of no service, Facebook finally reinstated its operations, switching promptly to damage control. A Facebook spokesperson released a statement explaining, “Yesterday, we made a server configuration change that triggered a cascading series of issues. As a result, many people had difficulty accessing our apps and services.”

Instagram took a more jovial approach to being back online, posting a GIF of Oprah Winfrey celebrating the news. A more creative approach and worthy of recognition given the circumstance. 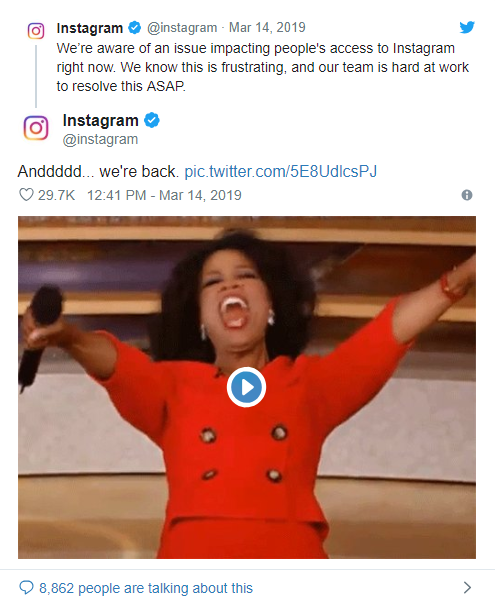 It goes without saying that on the day of the outage, millions of businesses suffered extensively. Any business, influencer, entrepreneur (or individual for that matter) who had planned to spend money on any of the social media platforms would’ve been faced with a day of lost revenue, missed business opportunities, miscommunication and a whole lot of frustration. After all, not many of us ever expect Facebook’s central operations to go down. With the outage occurring on Wednesday, by the time Thursday rolled around, Wall Street reacted and Facebook’s shares were down almost 3%.

Whilst countless companies had invested dollar spend into the Facebook family of apps, Facebook itself released a statement saying it was still investigating the overall impact, “including the possibility of refunds for advertisers.”

Given the company is estimated to pull in daily projected revenue of US$189 million, we’re pretty sure they can afford it. Will advertisers see any future refunds though? Watch this space…

When you look at the user base of Facebook, the social media giant estimates that 2.7 billion people worldwide use its apps, with 1.52 billion users utilising its services on a daily basis. A staggering level of global influence. So when something breaks, it truly is an issue affecting companies and individuals worldwide. To put this into perspective, popular website Down Detector graphed the outage below with some surprising results. It looks like Greenland, Russia, Canada and Alaska were the places to be that day!

So Who Were The ‘Winners’ On The Day?

In amongst the inferno of the Facebook outage, some savvy marketers seized the opportunity to snap up timely responses to the dramas unfolding online. In today’s modern business world, reactive social media is beginning to offer opportunists the chance to capitalise on events, providing relevant (and at times jovial) content which connects emotionally with frustrated users.

Let’s take a look at some of our favourites.

It seemed highly ironic that Facebook took to its Twitter profile to release its official company statements during the outage. As a popular news source with an active user base sending 500 million tweets daily, its global base of 261 million users grew in popularity, making it indeed a win for Twitter. Needless to say, a series of hashtags #facebookdown #instagramdown #whatsappdown and memes quickly began trending to capitalise on the scenario.

In the final quarter of 2018, Twitter released figures showcasing a user base of 126 million daily users, far inferior to Facebook’s 1,520 million, and 60 million fewer than SnapChat. Whilst the platform doesn’t have the same level of global reach as Facebook’s suite of apps, as a news source, it still stacks up as a crowd favourite for conversation and news-related activity.

In the Q4 and Fiscal Year 2018 Report released in February of this year, Twitter revealed ‘conversation’ as one of its four main investment priorities of 2019, stating; “Conversation is Twitter’s superpower. Promoting more conversation on Twitter ensures we are the place where people all around the world go to see and talk about what’s happening.” In light of recent events, it’s clear to see that the platform is already aligning with its goals so far this year.

Winner: Telegram Steps Up To The Plate

It didn’t take long for Pavel Durov (CEO of Telegram) to snap up the opportunity of releasing a targeted statement on his personal Telegram Channel the day after Facebook’s outage. Telegram is a free encrypted messaging service and is seen as a competitor to WhatsApp. It enjoys a healthy user base of 200 million active users (as of March 2018) and prides itself on a secure network which protects its users – who in fact fund the site through donations. A drastically different model compared to Facebook. It seems that it is this very difference which Pavel wanted to highlight in his update to his followers, focusing specifically on “true privacy” and a sudden influx of 3 million followers in the last 24 hours. Coincide or perhaps a subtle Facebook burn? You decide.

Stepping out of the corporate world and into the musical marketplace, American rapper Soulja Boy took to his personal account (again Twitter is victorious) to leverage the occasion to market his personal app. He claimed an outage like that of Facebook’s woes would “never happen to us” with an emoji and a ‘shake my head’ acronym to again take a swipe at Facebook’s situation. Whilst the likelihood of a hack, outage or technical issue is still a risk to any app on the market, this opportunistic post seized the moment with a timely post to highlight a problem, whilst providing a solution. Basic 101 marketing executed to perfection. 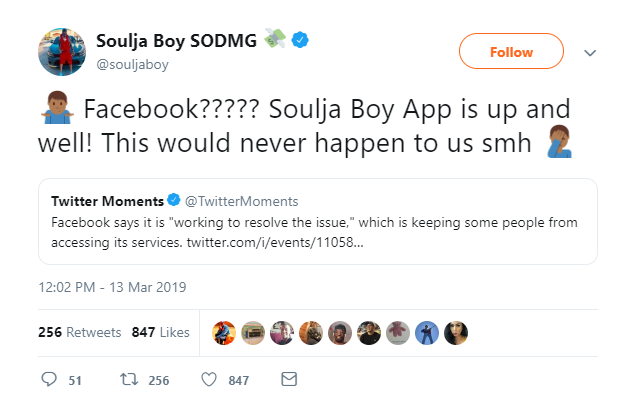 It’s official – when Facebook goes down, people turn to the news. Popular content analytics platform, Chartbeat reported a 3-5% increase in traffic news sites during the March 13th Facebook outage. Whilst these numbers are notable, these numbers were even higher during Facebook’s 2018 outage, where an analysis of 4,000 online news sources revealed an increase of 11% in direct traffic, supported by a 22% surge in mobile traffic apps during the 45-minute outage.

Whilst some of us turn to Twitter to see what’s going on, popular news sites are still a preferred option for finding out the latest in global events. This activity was also reflected again last year when news sites lapped up a 20% increase in traffic during a YouTube outage in October 2018, with users flocking to news sources to figure out what the problem was.

Facebook has made a concerted effort to downgrade the importance of news content on its platform, with traffic from news publishing websites falling by 40% since the beginning of 2017. The outage was a definite win for news sites across the world, who will perhaps be hoping for a repeat of the occurrence in the near future. 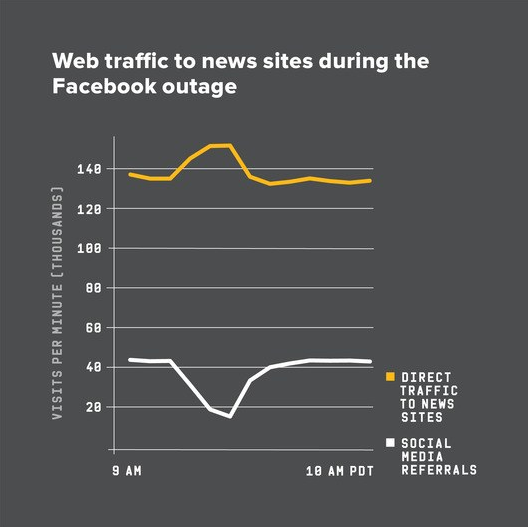 As we’ve seen, even a platform as established as Facebook, is at risk of outages. In fact, any website or app in the online digital space is at risk of hacking, malware or system errors which can take their activity offline. So much so, there are now websites dedicated to reporting outages to alleviate widespread panic and concern. Sites such as IsItDownRightNow.com have spawned a new method of ascertaining if it’s just your app or phone having issues, or if there actually is an outage.

These sites extend far beyond social media outages, and handle updates surrounding popular services such as Google, Amazon, Paypal and AOL, as well as email platforms such as Yahoo Mail, Gmail, Hotmail and Outlook. Entertainment services are also included, with users being able to check on system performance for paid subscriptions such as Netflix and Xbox. 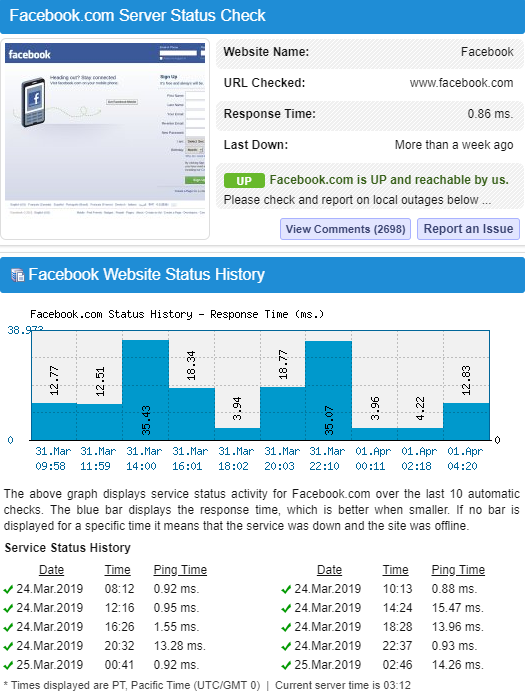 Too Many Other Winners To Mention

There were a host of other ‘winners’ and companies who benefited from increased traffic and engagement resulting from the outage. In fact, popular adult content websites were also winners during the outage, reporting surges in traffic – however we wanted to keep this article G rated. The ABC and Triple J’s popular ‘Hack’ radio program covered this in more detail in their recent article if you’re still curious.

Our cell phones have become pocket computers providing instant access to whatever we need, wherever we are, whenever we need it. So once one of our trusted platforms goes down, we react instantly. Some go into panic mode, whilst others turn to alternative sources for information, entertainment and conversation. The Facebook family of apps are a common feature in the daily lives of many of us on this planet. It’s a habitual symptom of our modern era.

In his book ‘The Power Of Habit – Why We Do What We Do in Life and Business’, award-winning author, Charles Duhigg unravels the reality that habits aren’t destiny. He explores the notion that we have full control of our daily lives with an ability to rewire our habitual reactions to what he calls ‘triggers’. One might reflect that Facebook, Instagram, Messenger and WhatsApp are embedded into our daily lives as habitual activities. Symptomatic of boredom, ‘FOMO’ or curiosity.

Others view these social media platforms as a place of business, communication, and content consumption to remain ‘up to speed’ in current events. Others are simply losing their faith in the platforms due to scenarios like the March 13th Facebook outage.

Whilst not many of us have a back-up plan if these apps continue to go offline, the recent events have most certainly given us all a new perspective to consider.

How will you react if/when it happens again? 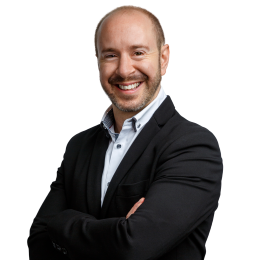