As our phones have continued to get smarter with the help of ever-changing technologies, the amount of people using mobile applications on a daily basis has increased.

Now, there is an app for every topic you could ever think of; from religion, to healthcare, to dieting.

Perhaps you’ve seen the success of some of your favorite apps and want to give it a try yourself.

You might even be a company who wants to advance their reach by giving customers another way of interacting with your brand.

Whatever your reason, however, making your app successful isn’t an easy task.

Now more than ever, you need to make sure that you have a strategic marketing plan in place to overcome your competition.

It’s not always easy knowing where to start when it comes to marketing your mobile app, however, so here are some of the most strategic ways you can market your app like a pro in 2019.

One of the easiest ways to market your app effectively is to connect with influencers within your niche.

If they’re a small influencer, otherwise known as a micro-influencer, they may promote your product for free.

You may have to pay larger influencers to promote your app to their audience, but if you have the budget, this strategy is definitely worth it.

Research has shown that teenagers are more influenced when it comes to buying the latest technology by other influencers than by traditional forms of advertisements, which is great news if your app specifically targets teenagers.

Use Social Media to Promote Your App

According to ComboApp, the best way to effectively market your app is to invest time and effort into creating a stellar social media presence.

It’s completely free, so even if you are creating an app on a budget, this option is available to you.

All you need is enough time to contribute towards conversations in the community you’re planning to target.

If you use this method, it’s worth baring in mind that you can waste hours doing nothing on social media, so you need to make sure that any contributions you are making are worthwhile.

Spamming a link in response to tweets that mention a keyword related to your app isn’t going to be helpful, and will probably make people avoid getting your app, even if they like the idea of it.

Instead, make sure you are responding to people with helpful advice that actually solves their problems.

You could then suggest your app as a solution as the conversation continues, by which point you would have gained that individuals trust.

Having this on social media where others will view it means that the individual you are speaking to and providing worth while information towards won’t be the only person who benefits from that interaction between the two of you.

If you’re going to use this method, it’s worth noting that your profiles should be up and active a few months before your app launches.

This provides you with enough time to gather interest in the release, and gain a worthwhile following that you can utilise to your advantage after the launch has occurred.

Have you ever looked at the reviews of an app and seen that the developer has directly addressed those who criticize their app?

You might not think this is a good idea because it could add fuel to the fire, but what it actually shows is that the app developers are interested in their current app users.

This will offer you an opportunity to improve your app, which will increase customer satisfaction and, as a result, retention.

Those who see your responses to critical results may also choose to download and check out your application to find out the real story, too, which has the potential to increase your app download rate.

Most of all, though, this marketing tactic will show a human side to the app, and prove that you are invested in it.

If you care about the app, and those using it, then others will care about you and continue being loyal, too.

You might have dreams of your app going viral instantly, but having that happen is extremely unlikely.

With the Apple App Store growing by over 1000 apps a day, you need to put some effort in to attract your target audience.

The good news is that it isn’t that hard.

All you need to do is figure out what problem your app solves, and the kind of people who need this solution.

Once you’ve found your target audience, focus all of your marketing tactics on this group of people first.

There’s always the chance to expand to those who might enjoy your app first, but you want to build hype and customer loyalty early on, and this is the perfect way to do that.

You might not have incorporated creating a website for your app into your marketing plans, but you really should.

The truth is, an app in itself doesn’t provide you with very many opportunities to rank in Google searches unless it is known by its name.

Even then, without a website, there are limited SEO opportunities, and it’s very difficult to create a buzz around your app.

By creating a website, you can create blog content and offer sneak peaks to your audience in the lead up to the release of your app.

In the example above, the app makers behind AIVA, an Artificial Intelligence Dating & Social App have a corresponding website where they introduce the app to the world. Naturally, the website provides the real estate for the app makers to explain the app concept in more details, have a section about the team and one section which talks about the underlining technology.

This will raise app awareness, and provide the Aiva app with a chance to market to more people by giving longer explanations of what they can expect to see from the app itself. 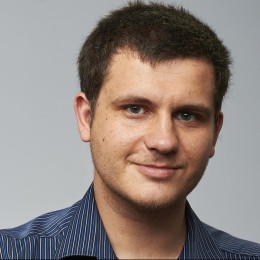